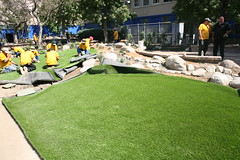 Yesterday we put the final finishing touches to this massive job. The artificial turf was laid down, all of the ponds were filled and tested, the last plants were all installed, mulch was spread out, and now its time to clean up. Everything went smoother than originally planned and we were actually able to finish within four days rather than five.

During the last portion of the build, Kym Whitley returned to the job site and took a tour with Terry Morrill as he explained how the paving stones interlock, and got into some more details on the natural pond system that was installed.

Our crews also got some camera time as they were working and are now offering autographs to anyone interested. 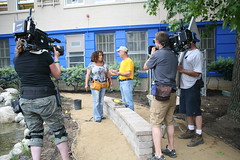 The actual unveiling of the project to the students and faculty will take place today and we want to make sure everything looks perfect for them and the cameras. We walked through the project with members of the film crew as they chose focal points for the television show.

Outside in front of the school, a ribbon cutting ceremony was being set up for the final walk though with all of the students. Kids, teachers, and the principle of the school were boarding buses at another location and brought in to see what has happened to their school over the past week.

The excitement of the unveiling was high, and we can’t wait for the premiere of this episode when it airs in September on NBC.

Everyone involved in this project definitely deserves a big thanks, especially the Pacific Outdoor Living crew that worked very hard and long hours to guarantee that this was going to be completed on time.

The level of craftsmanship and detail that they show is higher than what is expected in this industry, and makes it easier on us as a company to be proud of the work that we do compared to what we promise.

This was one of our favorite projects that we have ever worked on, especially since we were able to help a cause that is definitely being ignored. We hope that many more jobs like this will follow in the future. 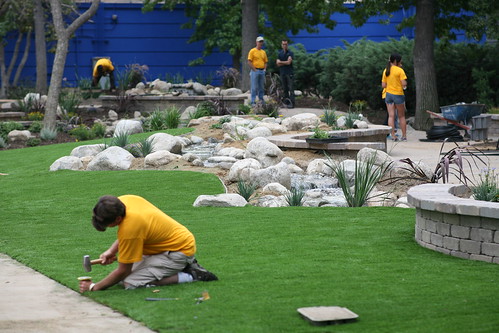 Get A Free Estimate

LOOKING TO REMODEL YOUR DRIVE WAY, PATIO, OR POOL?

GET A 100% NO RISK CONSULTATION TODAY